How to get to Split

Whether by plane, boat, bus, train or car, it's getting ever easier to travel to Split. With new trains, new air routes, a new motorway to Zagreb plus dozens of ferries and buses, Split is becoming one of Croatia's prime points of entry. There are not a lot of direct flights to Split (most go to Zagreb) that run all year but from April to October there are quite a few low-cost carriers that fly directly to Split from a number of cities in the UK, France and Germany as well as an assortment of other European countries. Other airports: Zadar (160 km, regular bus service to Split) and Zagreb (400 km, regular train, bus and plane service to Split).

Split Airport is, after Zagreb Airport, the most important in Croatia. Scheduled services fly to major European cities, with summer charter flights from more. The airport is about 25 km west from Split, near the city of Trogir. For more information visit the Split airport website: http://www.split-airport.hr/. or [email protected]
Tel: +385 21 203 555 ‎
Fax: ++ 385 (0)21 203 422

A shuttle bus run by Pleso Transport Company  operates between the airport and the city centre. Information: www.plesoprijevoz.hr. All international arrivals are linked up with the local bus service. A single ticket costs approximately 30 kn.

Taxis are available outside the terminal building at all times during airport operating hours.
Telephone: ++385 (0)21 895 237.
You can also pre-book a taxi transfer:
http://www.split-transfer-services.com/en/
http://taxiservicesplit.com/split-croatia

If leaving Split by plane, be careful to plan the journey to the airport in advance, as local buses don't run before 5 AM or after midnight.

There are year-round ferries from Ancona in Italy, as well as a fast catamaran service during summer. Carriers: Jadrolinija (http://www.jadrolinija.hr/) and Blue Line Ferries (http://www.blueline-ferries.com/) . Only a few companies run the ferry routes. Prices and amenities are roughly the same. It's best to choose based upon the schedule.

Split is the main hub for local boats and hydrofoils in Central Dalmatia. There are several boats a day to and from Brac, Hvar, Solta, Vis, Korčula and Lastovo.

The bus station of Split is located in the very centre of the city, right next to city harbour and railway station. This is the location that enables quick and simple communication and passenger transfer.

There are regular bus lines to and from Munich and Trieste. Most other bus lines involve a change in Zagreb. There are many buses to and from Zagreb every day. The journey takes between 5 and 7 hours (depending on the line and carrier).  For more information, see the websites of the bus stations in Split http://www.ak-split.hr, [email protected] and Zagreb (http://akz.hr/).

On most intercity buses you pay a fee for luggage. This fee of about 1€ per piece of luggage is paid to the driver upon boarding.

Split train station is right in the city centre, it is a few minutes walk from the port and from the old town. Expect very friendly grannies to be waiting with signs saying "Sobe" (rooms) at all arrivals and they will jump on anyone with a backpack. The train station is rather basic, because train travel is not much used to Split.

It is possible to travel by train to Split from elsewhere in Europe, although the majority of routes involve a change of trains at Zagreb. For detailed information on international lines, see the DB website (http://reiseauskunft.bahn.de/bin/query.exe/en) . There are regular lines to and from Zagreb, which take 6-9 hours depending on the line. Timetables can be found from the Croatian Railways website www.hznet.hr.. Trains are generally slower but slightly cheaper than buses in all of Croatia.

You can reach the city of Split from various directions:

You can also arrive in Split with your car by taking a ferry from Rijeka to Split, from Dubrovnik to Split, and from the major Italian harbours on the Adriatic coast (Pescara, Ancona, Bari). Note that availability of transport from Italian ports varies according to the season, with more connections being available during summer season (from June to September).

Local transport is served by a network of buses with 20 lines within Split and an extensive network of interurban buses that provide fast links with surrounding towns. Buses run from around 5am to nearly midnight. Services are daily and quite frequent such as 10 minutes on the major bus lines 1, 3, 4, 6, 8, 9, 17, but on other lines which go out of the city you may have to wait for an hour Monday to Saturday and find no service on Sunday.

Bus tickets cost cca 12KN one way and can be bought at the bus stops at the bus stops or from the bus driver. There is no need to have the exact amount of money, but you are requested not to use a large bill. The venue can be reached either by bus no.17 or by taxi.

Map of the bus network: 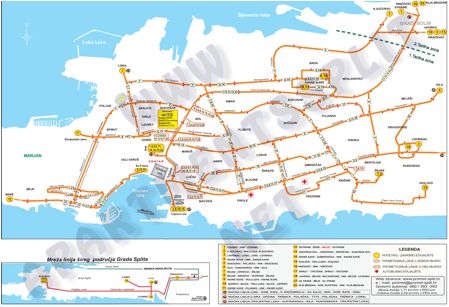 Rent a car in Split